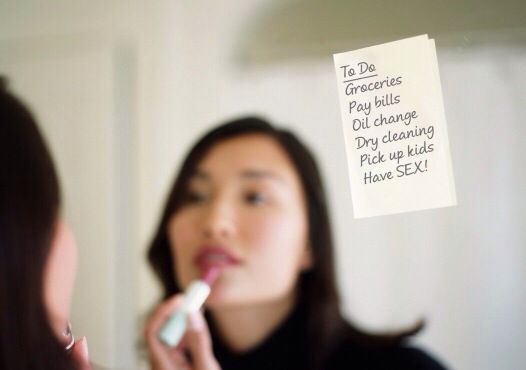 How often do you have sex? Is it as often as you would like? Do you feel you have a higher or lower sex drive than your partner? For my singles, how are you getting it on the regular? Friend with benefit or f— buddy?

I remember watching an episode of Army Wives where this topic came up. One of the couples was used to having sex daily, often more than once a day, but her husband stopped wanting to. She immediately assumed it was another woman when her friends had to calm her down and ask if anything recent had changed in their lives or schedule. He was promoted in ranks at work and with promotion in the military it required a lot more of his time. He was in charge of a Platoon and had to arrive early and stay later than usual. Of course she didn’t understand this; she just felt rejected because he had never told her no before and this was outside of their normal behavior.

Her friends laughed about how serious she made the whole situation but began to talk about their own sex lives. One had a schedule for every Wednesday and Saturday. One said whenever the kids were asleep and they weren’t too tired. Another said two to three times a week. It sounded odd, but it was what worked for them. I began thinking of my own relationships and that of my friends. Is scheduling sex a normal occurrence?

I never thought of myself as having a high sex drive until I started talking to some of my friends and realized I was the freak of the group. You know every group of friends has that one person who is a freak, or closet freak, that everyone at some point goes to and asks advice about something sexual in nature and they usually know the answer. Well damn if that wasn’t me. But whatever. I guess I’m more curious to know how that works. For those who schedule or don’t have sex regularly, how is that? Do you just lay there and hold each other? Spoon?

Work with me on this. I’m seriously trying to understand this idea of sleeping next to my man and not touching him and jumping his bones. The idea of feeling a man’s skin next to mine turns me on. Hell, brushing against my own skin turns me on sometimes. I don’t care how tired I am – and a few ex’s of mine can confirm this – I will always want it as long as there is blood coursing through my veins. When I’m dead I’ll stop being horny. Even if it’s something as simple as just making out, I want my lover to feel wanted and needed. I want them to think I can’t get enough of them. Hell, I want them to tap out because I’ve worn them out. I want to wear myself out.

Physical intimacy isn’t everything in a relationship but for some it is an integral part. For anyone who has heard of Dr. Gary Chapman talk about the Five Love Languages, physical touch is one. Some people need that in order to feel loved. No matter how much you say it with words and gifts, if you don’t hug, caress, touch, stroke, kiss, tickle or snuggle up on them, they may not hear your love. They may need to feel it.

Many women use sex as a negotiation tactic to get men to do something they want. However, what they fail to realize is that using that as a wager shows how small minded they are in the game of love. Men are not mind readers. Yes, most of them don’t listen well, but we also don’t speak clearly either. We ‘hint’ around at what we want rather than just get to the point and make everyone’s lives easier. Why hold a grudge against your man because he mixed up the signals of the hints you threw at him? That’s not fair. It’s not. What if the tables were turned?

I’m not saying just give it up and give in without standing for what is important to you. Both parties should be respectful of one another. One should never feel slighted and ignored. However, when you get that tap on the shoulder, it wouldn’t hurt to be a little gentle, relax a bit and just enjoy one another. Also, BE in the moment. Don’t think about the baby, the bills, work tomorrow, groceries, the meeting, the PTA group, soccer practice, etc. Think about what’s happening between those sheets in that moment and really listen to your body. Listen to his. Treat each other like a treasure map and explore. Sometimes all it takes is getting back to the basics to reset that expired love clock.

Perhaps you may want to experiment with some toys or use some KY jelly if you just don’t seem to stay moist enough anymore. It happens – no need to worry. Also, it doesn’t always have to end in sex. Pretend you are teenagers again and just have a hot and heavy make out session and stop – right at that heightened moment that you would expect a parent to burst in on you and ruin things. Leave the anticipation for later in the night, early morning.

Life happens. Sometimes scheduling sex is the only way you can make it work. Not everyone is an insomniac like me, so guys don’t be too critical on your ladies if they are exhausted. But ladies, if you got it, give it. Even if I was tired and yawning at work the next day, I’ve never regretted an over due love session that went into overtime.

Do you schedule sex? What are your thoughts about this? I’m curious to hear. Drop me a line below…

5 thoughts on “Do You Schedule Sex?”